As the global climate deteriorates, all human beings discuss how to deal with climate change. Energy conservation and emission reduction and the search for new energy sources are important ways to reduce environmental damage. At present, the global automobile ownership has reached 1 billion, and automobile exhaust is an important factor that aggravates environmental degradation. To this end, many organizations are developing pollution-free electric vehicles, and electric vehicle power batteries are the core of them, and they are the focus of research.

Therefore, the fast, effective, safe and reliable charging system is currently the key technology developed in the electric vehicle industry.

Different charging methods are important factors affecting the performance and service life of single-cell lithium-ion batteries. Suitable charging methods not only maximize the battery capacity, but also extend the battery life. This effect is mainly reflected in three aspects. :

This charging method divides the charging process into three phases. As shown in Figure 1. 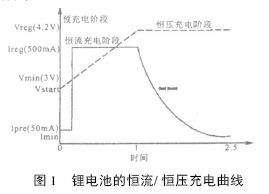 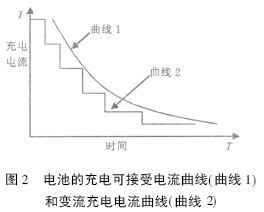 The intermittent charging method refers to increasing the intermittent time after charging for a period of time to reduce the polarization phenomenon. In the intermittent phase, the hydrogen and oxygen generated by the electrolyte gassing reaction have time to be recombined, which can effectively slow down the voltage rise in the battery. Eliminate ohmic polarization and reduce internal resistance, so that the battery can accept more power during the next charging process.

2 The charging method used in this article

The characteristic of the voltage limiting variable current pulse charging method is that the constant current charging phase of the constant current/constant voltage charging mode is changed to the variable current pulse charging, and the current magnitude is in accordance with the characteristics of the variable current charging, and the initial current is large, try to Approximating the charging to accept the current to ensure that the battery obtains sufficient current. At the same time, the pulsed charging current is used to effectively suppress the polarization effect, slow down the internal pressure of the battery, and reduce the internal resistance. Later, the constant voltage charging method is adopted to obtain overcharge. the amount.

Lithium-ion battery packs for electric vehicles are connected in series by multi-cell lithium-ion batteries to obtain high output voltage. Since the battery characteristics of the individual cells are inevitably different during manufacturing and use, the reasons for this difference are: Due to the processing technology and other reasons, the capacity and internal resistance of the same batch of batteries may be different; the battery usage is unbalanced due to temperature differences during use; the discharge conditions between different batteries are different, accumulating for a long time, causing the battery Unbalanced state. Long-term use will inevitably lead to imbalance of parameters such as capacity, internal resistance and terminal voltage of each battery, thus affecting the actual capacity of the entire battery pack, shortening the life, causing waste and increasing costs.

At present, the method of equalization control is mainly divided into energy dissipation type, energy conversion type and energy transfer type according to energy consumption.

Energy dissipation refers to the discharge of a battery with a higher voltage in the battery pack to achieve equalization. The commonly used method is the current shunt method. The shunt method is to connect each battery in parallel with a shunt resistor and control it through the switch. In the process, when a battery voltage is high, its shunt switch is closed, and the battery is shunted. This method is simple and easy to implement. The disadvantage is that the shunt resistor is always losing power, low energy efficiency, and generating heat. Electric vehicles need Considering the problem of energy efficiency, otherwise it cannot be promoted on a large scale. Obviously, this method of equalization is not applicable. There are two main types of energy conversion, one is to supplement the battery pack's overall voltage to the starved single cell, and the other is The cell voltage is converted to the overall voltage. The coil energy conversion method is commonly used, and the energy is supplemented to the starved battery by the transformer. There are three types of switches: a shared type, a shared type, and a free type. The coil energy conversion method equalizes the charging current. The charging rate is very fast, but when a large number of batteries are charged in series, the shortcomings are highlighted. At this time, a large number of transformers and magnetic wires are required.

The capacitive equalization circuit controls the switching of the switch through the MCU. First, the battery with the highest voltage is charged to the capacitor. After the battery is fully charged, the switch is switched. The capacitor is charged to the battery with low voltage, and the process is repeated many times. The advantage of this equalization circuit is that The structure is simple and the volume can be made small. The disadvantage is that a large number of power electronic switching devices are required, and the loss is large and the time required is long, so it is not suitable for charging the electric vehicle battery pack.

The principle of the inductive adjacent equalization circuit is that each battery is connected in parallel with an inductor to detect and compare the voltages of two adjacent batteries B1 and B2. If the B1 voltage is high, the MCU controls the duty ratio of the PWM output signal to control the switching device. , the B1 energy is stored in the inductor, and the common capacitor is charged, and then the energy is transferred to B2; conversely, if the B2 voltage is higher, the duty ratio of the PWM output changes, so that the energy flows from B2 to B1. Features of the equalization circuit It is efficient, fast, and small. The disadvantage is that the control algorithm is more complicated. 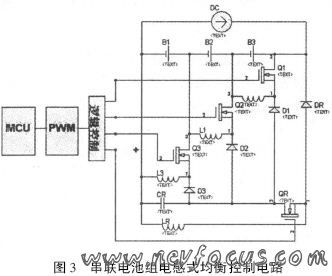 In the system, the status information of each battery in the battery pack is detected in time, sent to the MCU, and processed by an algorithm to control the output of the PWM to drive the switching device to be turned on and off. When a battery voltage is high, the corresponding switch When the device is turned on, the battery stores energy into the corresponding inductor. When the switch is turned off, the energy is transferred to the downstream battery, and the excess energy is transferred to the common capacitor and fed back to the charging circuit.

Based on the above research, this paper designs a charging system with equalization function based on the voltage-limiting variable-current pulse charging method. The system uses MCU to control, and samples the voltage, current, temperature and other parameters of the battery. In the MCU, and through a certain algorithm, control the duty cycle of the PWM output signal, control the pulse charging current, control the switching device of the equalization circuit, and achieve balanced charging. The block diagram of the system is as follows. 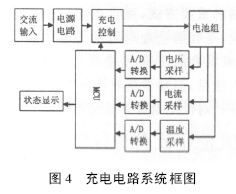 In this paper, through the study of a variety of traditional charging methods, combining the advantages of various methods, a voltage-limiting variable-current pulse charging method is proposed, which makes the actual charging current close to the charging acceptable current, shortens the charging time, and effectively prevents polarization. At the same time, in response to the problem of unbalanced state of individual batteries in the battery pack, the balance control research is carried out to make the power in the battery packs mutually transfer, ensuring that the batteries reach an equilibrium state at the end of charging, and design on the basis of this. The structure of the battery pack charging system.