At present, there are two types of 3D display technology that we are more exposed to: glasses-type 3D display; glasses-free 3D display (that is, naked-eye 3D display). In addition, there are holographic displays, etc., but holographic technology is still difficult to promote. Glasses-style 3D display, as the name implies, requires users to wear special 3D glasses to form 3D effects by allowing the eyes to observe parallax images respectively. Glasses-type 3D display is a technology model commonly used in movie theaters and 3D TVs. Glasses 3D display has a low technical threshold and is simple to implement. However, there are disadvantages such as the need to change the user's viewing method, inconsistency with usage habits, and the reduction in display brightness, which is particularly unsuitable for application on mobile devices.

The naked-eye 3D display refers to placing a specially designed parallax barrier or lens array on the display panel through parallax barrier or lens array technology, and making the parallax images enter different eyes through their light distribution to form a 3D effect. The naked-eye 3D display technology is complex. In addition to the hardware, a special image processing algorithm is required to form a 3D effect. This solution has been recognized by many notebook manufacturers and will be available in the second half of this year. 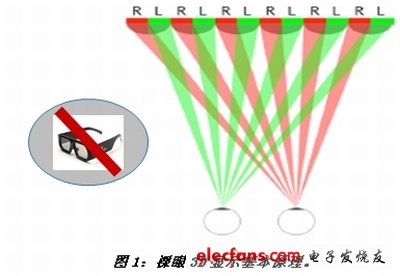 The lens-type naked-eye 3D display technology does not reduce the display brightness and does not need to change the user's viewing habits, and is particularly suitable for implementation on mobile devices. SuperD's naked-eye 3D display technology needs to improve the existing LCD production and manufacturing process flow, and needs to synthesize new materials. While using precise micro-processing technology to make optical molds and devices, it needs to develop special software and graphic image algorithms to Optimize 3D effects and meet user needs for film sources and applications. In order to balance the load of 3D graphics and image processing and retain the space for the development of completely independent 3D display graphics and image processing in the future, a special chip needs to be designed.

SuperD's 2D / 3D eutectic technology is also an important attribute different from glasses-type 3D, because glasses-type 3D cannot distinguish the 3D area and 2D area on the screen, and can only use the same processing method, which leads to 2D display The effect is disturbed by the 3D glasses and becomes less natural, which affects the visual experience.

In order to make 3D display not change the habits and application effects of 2D display, SuperD has developed a technology called pixel-by-pixel 2D / 3D switching (referred to as 2D / 3D eutectic technology). Its feature is to allow 2D and 3D content to be displayed simultaneously on the same display panel. For example: this technology can be used to display video on demand on the Internet, the video window can watch 3D movies, and other areas are still 2D display, including 2D pictures, text, etc. are not affected. Figure 2 describes the effect of 2D / 3D eutectic technology.

The 2D / 3D eutectic technology developed by SuperD includes: 1. Specially designed birefringent optical device, which can realize the switch of the lens state under a certain driving voltage; 2. Design of the drive circuit and drive electrode specifically for this optical device Fully considered the optical interference effect, so as not to affect the picture effect at all; 3. For this optical device, the pixel-by-pixel 2D / 3D drive realizes the switching, moving, zooming and other functions of the 3D area.

The area labeled "3D window" in Figure 1 shows the 3D effect, and the area outside the 3D window is the 2D text area. The largest application area of â€‹â€‹2D / 3D communion technology is the Internet. Through this technology, people can continue to use the functions under 2D while enjoying 3D content on the Internet. Because the Internet has penetrated into all areas of life and production, through the Internet we can mobilize everyone to use a lot of resources to produce, disseminate and share 3D content and 3D applications, which in turn will greatly promote the development of 3D display technology, so 2D / The support of 3D eutectic technology to the Internet is a very virtuous circle, which not only ensures the compatibility of 3D display and 2D display under the existing technical conditions, but also promotes the continuous development of 3D display. 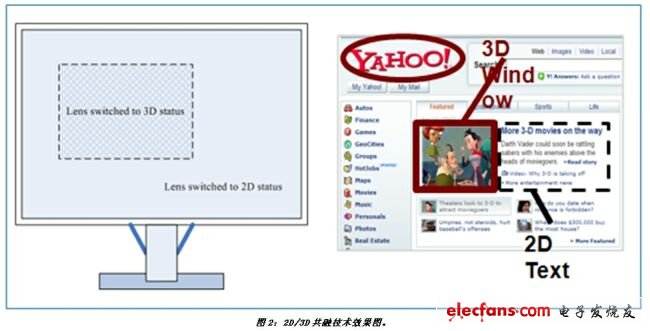