Skip to content
November 25, 2021
Super Mario VR, that day will come. "He said.">
â–¼
Climbing Mount Everest in VR: In addition to not cold, everything else is the same from Baidu VR.

It is certainly not easy to climb Everest in the field, but you may want to try Everest climbing in VR. Now SÃ³lfar Studios launches "Everest VR" virtual reality mountaineering experience on the Oculus Rift and Touch platform to meet your desire. Thor Gunnarsson, co-founder and head of business development at SÃ³lfar Studios In an interview in Berlin last week, landing the Oculus Rift platform will help realize the studioâ€™s revenue, as the VR experience has a â€œlong tailâ€ effect on demand.

"Our time allocation and expectations are in line with market opportunities, and we have been trying to do that," said Gunnarson. â€œThe long tail demand has been very stable. From an investment point of view, we want to maintain the balance of this project. Each VR companyâ€™s goal in 2017 is 'Donâ€™t break'.â€

SÃ³lfar Studio's Everest VR adds some exciting new content, including a Lhotse Face, a 1,200-meter-high blue ice that runs from the second to the fourth battalion. On the other hand, there is an extended version of the "God Model", which uses the documentary photograph of the summit of Mount Everest for the first time.

Everest VR allows users to explore the wonders of Mount Everest with a first-person experience. It was first launched on the HTC Vive platform exclusively in August 2016, and now you can purchase this work through Oculus Home for $15, or about RMB 100. It supports the Oculus Touch controller.

Kjartan Pierre Emilsson, founder and CEO of SÃ³lfar Studios, said in a statement: â€œOur team has worked tirelessly to optimize Everest VR for Oculus Rift. We have updated a lot of content to To ensure that the user has the best and most visually accurate Everest experience, we have added photos of the 1953 expedition to enrich the mountaineering experience, which provides a new documentary lens for this VR climbing environment. â€

Gunnarson said that launching the original Everest VR on Steam VR is a challenge, in part because there is no non-game category there. Even though the company tried to describe Everest VR as a mountaineering experience, some people still think it is a game. 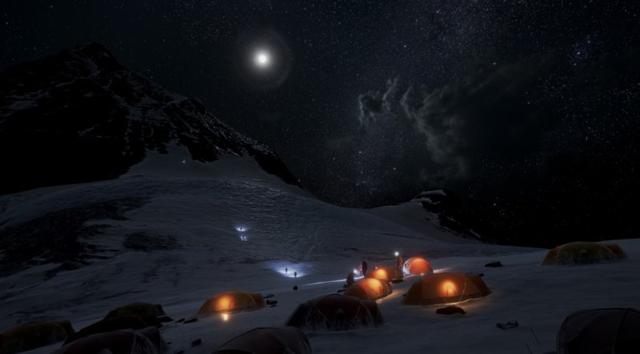 This Everest VR tour covers famous milestones and interactive activities. From the base camp, Khumbu Glacier, Hillary Step, Lhotse Peak, to the Peak, there is also a â€œGod Modeâ€ to see at a glance. Restless mountain views. You can "teleport" throughout the mountains.

With this version of Rift, users can climb along 18 different historical expeditions, including the path of the British Expedition in 1953 (Edmond Hilary and Tenzing Norgay made their first appearance on the summit of Mount Everest). If you choose the Hilary Expedition in the "God mode", you can view high-resolution color photographs of the 1953 expedition along the way, which usually appear in the actual location where the photograph was taken at the time. This documentary material was provided by the Royal Institute of Geography (IBG) in London. The collection of Mount Everest in London is the largest in the world.

In order to create such a realistic experience, SÃ³lfar Studio and RVX brought together tens of thousands of high-resolution images. Using advanced stereographic measurement techniques and multi-resolution coloring techniques, the Everest CGI model was created.

Gunnarson said that some climbers have begun to use the "Everest VR" experience to plan their own adventure arrangements.

"They think digital mapping is the most accurate way of planning an expedition," he said.

Gonnason said that it is not easy to re-texture at a frame rate of 90 frames per second in VR. This experience is based on the Unreal Engine 4, which provides realism and visual fidelity as a leader in real-time graphics.

SÃ³lfar Studio was established in October 2014. Gonnason said that the company is developing its PlayStation VR version in the first quarter of this year. They will be doing a new project and will also use the companyâ€™s visual technology, but it is not convenient at this time.

As for the future, Gonnason said that VR will slowly develop and gather more popularity to gain momentum.

"We haven't launched a killer app. We need to launch our own "Super Mario VR," which will come that day," he said.