Green Lighting Shanghai will open in April in Shanghai

More than 80% of the high-efficiency energy-saving landscape decoration and lighting at the 2010 Shanghai World Expo will become the world's largest concentrated production area of â€‹â€‹LEDs. At the end of the two national conferences, delegates will continue to promote the government with high subsidies. The billion-dollar energy-saving lamp replaces the incandescent lamp with large power consumption; the pilot project of â€œTen Cities and Ten Thousand Milesâ€ carried out in 21 cities announced to the world that LED lighting has moved from traditional landscape lighting to road lighting, and has been smoothly scaled up. ... There are indications that under the situation of global energy shortage and increasing environmental protection requirements, the new light source and new energy lighting industry has shown broad development prospects.

It is reported that a number of LED will appear one by one in the new exhibition site: Philips Release series LED solutions designed for the hotel, such as MasterLED (used in place of halogen lamps, incandescent lamps and energy-saving lamps). Philips Lighting company official said, the hotel lighting, may be because of the development of LED technology and usher in a revolutionary change. BYD solar LED lights, use of special BYD iron battery charge and discharge control developed photosensitive system and a lighting control system of the DC power supply, having reliable, long life, easy installation, energy saving, economical and durable and many other advantages.

Year-end forum theme of the Forum will be "the development of thinking and new energy sources and new tactics lighting," Forum "innovation and development of new energy sources and new lighting," as well as the composition of the four summit, close to a hundred industry experts, scholars, business executives will start wonderful game, then a total new source of new energy lighting industry in the future. Wu Ling, Secretary-General of National Semiconductor Lighting Engineering R&D and Industry Alliance, will elaborate on the development strategy of semiconductor lighting emerging industry; Professor Hao Luxi from Tongji University's School of Architecture and Urban Planning will interpret the â€œ2010 Shanghai World Expo Lighting Engineering Innovation and Application Designâ€; Shanghai World Expo Ni Yang, the designer of the China Pavilion, will tell the public â€œLighting strategy and energy-saving measures for the China Pavilion at the 2010 Shanghai World Expoâ€; Tang Guoqing, director of the Semiconductor Lighting Professional Committee of China Lighting Association and Cui Rui China Market, will explain LED and lighting changes. ... From the senior executives of OSRAM, GE, Siemens, Philips Lighting, etc. will also stage a speech, to discuss the development of new light source and new energy lighting industry, all the heroes of your way to sing me to debut, I believe it will trigger a field of semiconductor lighting New thinking.

Up to now, IBM Public Sector Asia Pacific, Lumileds Asia Pacific, Jiegao Optoelectronics, Skyworth Group, Qinshang Optoelectronics, Guangdong Zhonglong Transportation and other well-known enterprises have confirmed that they will come to visit the exhibition. It is expected that the site will attract more than 3,000 companies and institutions. participate. I believe that this new line of new light source and new energy lighting industry will surely lead the industry to a new revolution.

For more information on the latest developments and activities can be found at:

What is Rigid PCB?

Rigid PCB are Printed Circuit Boards that are made out of a solid substrate material that prevents the board from twisting. Possibly the most common example of a rigid PCB is a computer motherboard. The motherboard is a Multilayer PCB designed to allocate electricity from the power supply while simultaneously allowing communication between all of the many parts of the computer, such as CPU, GPU and RAM.

Rigid PCB make up perhaps the largest number of PCBs manufactured. These PCBs are used anywhere that there is a need for the PCB itself to be set up in one shape and remain that way for the remainder of the device's lifespan. Rigid PCBs can be anything from a simple single-layer PCB all the way up to an eight or ten-layer multi-layer PCB.

All Rigid PCBs have single-layer, double-layer or multilayer constructions, so they all share the same applications.

Some characteristics of rigid PCB

Rigid PCB is made up of different layers that are joined together using adhesive and heat, providing a solid shape to board material. Following layers are used to develop a rigid PCB. 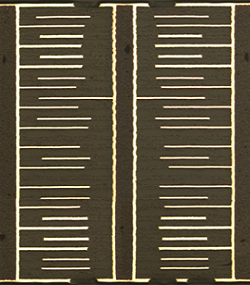 The differences between Rigid PCB And Flexible PCB

Learn more about JHY PCB by exploring the manufacturing capability of Rigid Printed Circuit Board below. We can do more than you can imagine.