Skip to content
May 08, 2019
There are many varieties of audio wires, and the design concept is also very different, and the price is high or low.

When the ideal speaker cable and signal cable transmit signals between the audio equipment, the signal should not cause any loss, no distortion, and no external interference. However, in the music playback system, there are indeed a number of acoustic wires that play a role, and people's understanding of the role they play is not enough. In fact, choosing the right speaker cable and signal cable can make the complete sound system perform its best performance. When a sound device is equipped with a small sound cable, it will not let it in any way. Audio equipment can fully realize its potential when playing music. Therefore, the purchase of good audio wire can make the audio equipment have the best performance under the premise of spending as little as possible.

The following is a more comprehensive analysis of speaker and signal lines. The analysis will introduce the balance and unbalanced cables, the two-wire crossover cable, the matching of audio cables with audio equipment, and the purchase of audio cables . At the same time, it should be pointed out that some of the most expensive speaker cables and signal cables do not necessarily have the best sound.

First, some terminology related to speaker and signal lines will be introduced.

â€¢ Speaker cable: The speaker cable is used to transmit the high-current music signal output from the power amplifier to the speaker.

Digital signal line: A single signal line used to transmit a two-channel stereo digital audio signal from a CD turntable or other digital source to a digital processor. .

Â· Two-wire crossover cable: refers to the dedicated speaker cable used to connect a power amplifier through two sets of (pair) speaker cables instead of a set (pair) of speaker cables.

XLR plugs and sockets: The XLR plug is a three-pin plug for balanced signal lines. The XLR socket is mounted on the base of the audio equipment and is designed to be connected to the XLR plug.

â€¢ Terminal: Refers to the terminal for the speaker cable that is attached to the power amplifier and speakers.

â€¢ AWG Specification: Refers to the American Wire Specification, which measures the diameter of a wire (usually a speaker cable). The smaller the label of the AWG, the thicker the wire diameter. Usually, the wires used for lighting are 18th.

In addition, the simplest is to strip the bare wire ends of the outer insulation. 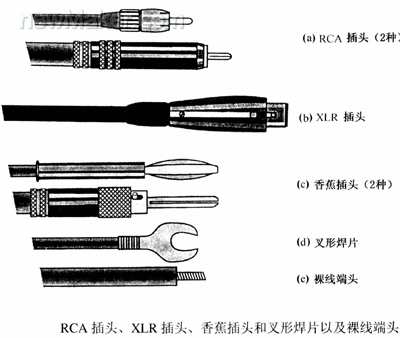