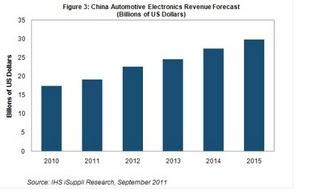 The growth rate of sales close to double digits shows that China's auto electronics market is full of vitality. In the Chinese market, electronic systems currently account for 40% of the total cost of ordinary cars. In addition, more and more automobiles in China have begun to adopt more complex electronic systems.

Overall, sales of automotive electronics in the Chinese market in 2015 are expected to reach US$29.9 billion, as shown in the figure.

It is worth pointing out that under the impetus of joint ventures such as Dongfeng-Nissan, Guangzhou Automobile-Honda and Beijing Auto-Benz, the process of localizing manufacturing and design of key auto parts in China has accelerated. At present, China accounts for 20.6% of the global automotive electronics market. This trend will surely push this ratio to a higher level in the near future, and it will also enhance Chinaâ€™s key position in the global automotive industry chain.

As consumer demand for mid-range and luxury vehicles equipped with a large number of electronic systems continues to increase, the consumption of semiconductor devices in the Chinese automotive market will reach US$3.8 billion this year, an increase of 15.2% from the US$3.3 billion in 2010. Infotainment Semiconductor will be the largest field in China's automotive electronics chip market in 2011, with sales expected at US$1.2 billion. Followed by power system semiconductors, for 979 million US dollars; information and entertainment navigation system semiconductors, for 718 million US dollars.

In terms of electronic applications, the most promising semiconductors in the next five years include automotive passive and active safety systems, as well as energy-saving power mechanical devices. Vendors attach great importance to these two areas and respond to China's 12th Five-Year plan to increase production.

As far as various types of semiconductor devices in the Chinese automotive electronics market are concerned, it is generally believed that the ICs with the smallest components in the medium-term have the greatest potential, focusing on engine control units (ECUs) and body control units (BCUs) in power systems and safety electronics. As the Chinese automobile industry will use navigation systems more widely in the next two or three years, it is expected that the output of memory integrated circuits will also increase.

After the earthquake in Japan in March, Chinese automotive customers rushed orders because of concerns about supply disruptions. In the first half of the year, semiconductor suppliers desperately produced to ensure delivery. However, it is expected that the adverse effects of the earthquake in Japan will disappear in the second half of this year.
Home
Recent Posts
Archives
Tags