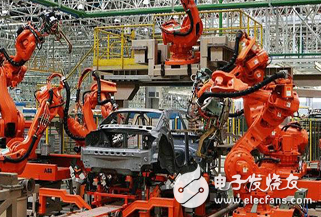 Industrial robot is a multi-functional, multi-degree-of-freedom mechatronics automatic mechanical equipment and system that can complete certain operational tasks in the manufacturing process through repeated programming and automatic control. It can be combined with a manufacturing host or a production line to form a single or multiple machines. Machine automation system, in the unattended, to achieve a variety of production operations such as handling, welding, assembly and spraying.

At present, industrial robot technology and industry are developing rapidly and are increasingly used in production. It has become an important high-level automation equipment in modern manufacturing. Since the advent of the first generation of robots in the United States in the early 1960s, the development and application of industrial robots has developed rapidly, but the most notable features of industrial robots are summarized as follows.

1. Programmable. Further development of production automation is flexible automation. Industrial robots can be reprogrammed as their working environment changes. Therefore, it can play a very good role in flexible manufacturing processes with small batches and multiple varieties with balanced and high efficiency. It is an important part of flexible manufacturing systems (FMS). .

4. Mechatronics. Industrial robotics involves a wide range of disciplines, but it is a combination of mechanics and microelectronics â€“ mechatronics. The third generation of intelligent robots not only have various sensors for acquiring external environmental information, but also have artificial intelligence such as memory ability, language understanding ability, image recognition ability, reasoning and judgment ability, etc., all of which are applied to microelectronic technology, especially computer technology. The application is closely related. Therefore, the development of robotics will certainly drive the development of other technologies. The development and application level of robotics can also verify the development and level of a country's science and technology and industrial technology.

We adopt the advanced technology imported from Europe, patented technology, specialized software to optimize the design for33kV cast resin Dry Type Transformer. The core is made of cold-rolled grain-oriented silicon steel sheet which cut in step-lap by GEORG Germany TBA core cutting lines and laminated by the method of fifth-order step-by-step stacking technology, enabling the no-load performance of the core to improve greatly. The epoxy resin from American HUNTSMAN is adopted for the windings which casted in the vacuum resin casting machine imported from HEDRICH, Germany. The winding material ensures good permeability, no bubbles occur, which leads to minimum partial discharge. The HV and LV winding mate with each other tightly, which ensures solid strength of structure and capability to withstand short circuit and vibration. Under normal service condition, the service life of dry type transformer is 30 years. No crack will form on the surface of transformer winding due to temperature variation as long as the transformer runs under normal service condition.